Rebuild the U.S.-South Alliance and the North-South Cooperation

Rebuild the U.S.-South Alliance and the North-South Cooperation

Unless the U.S. understands the special role of relaxing the tension on the Korean Peninsula that the business of the Gaesung Industrial Complex provides, the anti-U.S. sentiment in South Korea is likely to increase, said a high-ranking Korean official to its counterpart last spring in his visit to the U.S. This can be interpreted as pressure on the U.S. governments negative attitude toward the business of the Gaesung Industrial Complex.

Have you ever said no to North Korea as you just did to us? replied the counterpart.

In late summer of the same year, the two counterparts met in Washington D.C. again. With only the passing of a few months, the attitude of the U.S. official was significantly changed, and he said, I was very surprised to see that the Korean government transferred 468 North Korean defectors, who had been staying in East Asian nations, on its two special flights. This made me have an entirely different view of the Korean government.

The U.S. official regarded the massive transferring of North Korean defectors to the South as a rare case of the South Korean governments way of saying no to the North. The entry of 468 defectors was greatly hailed by its ally, the U.S., but rapidly cooled down the relationship between the two Koreas.

South Korea is in a dilemma. When the ally, the U.S., says, Yes, the brethren North says No. When the North nods its head, the U.S. shakes it. Now, experts have stressed that neither the romantic theory of mutual assistance by the old left, nor the Cold War style theory of the alliance between the U.S. and the South by the old right would provide any answers. The alliance between the U.S. and South Korea, the central axis of the foreign security policy, must find a new vision for a head start.

Why a New Vision?

According to the Samsung Economic Research Institute (SERI) report regarding the pending issues and challenges regarding the U.S.-South Korea relationship, the U.S. has provided the South five advantagescapital, technology, market, knowledge, and securitywhile China has the market and manufacturing sites to provide. It is true that South Koreas economic cooperation relationship with China has been closer than before and perhaps as important as that with the U.S., but it is hard to see that it could replace the strategic values of the U.S.-South alliance. Researcher Lee Dae-woo from the Sejong Institute stressed that in order for South Korea to protect its survival in the middle of a hegemony struggle between China and Japan, it must maintain the connection with the U.S., the worlds superpower.

However, the current framework is too outdated to sustain the value of the U.S.-South alliance.

Balance between the Two Koreas or the U.S.-South Cooperation and Comprehensive Trust

Dong-A Ilbo and the Korea Research Center (KRC) conducted a public poll on December 23 and 24 to find out the ideological preference of 1,502 respondents. The result was quite intriguing. About half (51.3 percent) of them favored the unconditional economic assistance for the North, while 26.2 percent were against the economic assistance. Then, 45.4 percent of respondents said they thought the U.S.-South alliance was more important then ever, while 45.4 percent supported independent foreign policy. People were progressive regarding providing assistance to the North, but were much conservative in terms of foreign policy.

Such ideological situation with a double standard is the result of the special circumstance on the Korean Peninsula. Therefore, unless we make this unique situation ours based on a new vision for the U.S.-South alliance, ideology struggles inside South Korea or friction between generations will not be prevented, experts point out.

An establishment of a new vision for the U.S.-South alliance first requires clear and accurate definition of the mutual assistance of the two Korean nations. Dong Yong-seung, North Korea team manager of SERI, said that we must closely check the meaning of the phrase if the trust between the two is strong enough to use brethren instead of nations and if the assistance is for the Kim Jong Il regime or the people of North Korea.

Furthermore, some have also pointed out that the cooperation between the U.S.-South should expand beyond the government level to the overall part of their people and society as well. The cooperation area should expand beyond military matters, leading to much comprehensive relationship on the basis of trust-building between the two nations, and this will be very critical to South Korea of the 21st century, said professor You Ho-yeul of Korea University.

Single Voice toward the Outside World

Last year, ruling party congressmen and opposition party congressman separately visited China to assess the condition of Chinas history distortion regarding Goguryeo, of which the Beijing diplomacy circle long made a mockery. The Korean Peninsula is already divided in two. If the South too is divided despite such circumstances, it will be a piece of cake for the outside to deal with the South. So, I hope that 2005 will be the year of producing united foreign policies, said professor Jung Dae-ho of Seoul National University.

All social standings should try to create an environment where serious discussion about the sound future of the U.S.-South alliance can be activated. Particularly, I think the TV discussion program displaying only opinions from each extremist should be removed, said professor Kim Sung-han of the Institute of Foreign Affairs & National Security. This meant that uniting separated public opinions is the first phase to establish a new vision for the U.S.-South alliance. 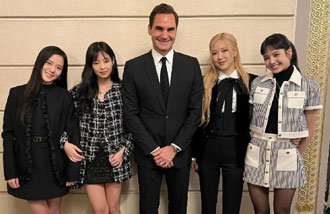 Federer surprises fans with a snapshot with Black Pink